DPx H.E.S.T. Pass Around And Review

I took part in a knife pass-around that started about six months ago.  I was the 14th and final person on the list.  The knife was a DPx H.E.S.T.   DPx stands for Dangerous Places Extreme.  The company owner is Robert Young Pelton who has traveled to many of the most dangerous places on earth and has even written books about his experiences.  If you'd like to see more about his products and experiences you can find his website at http://www.dpxgear.com/.

The DPx H•E•S•T or Hostile Environment Survival Tool™ is the knife that started it all...the original, brutal-use everyday carry fixed survival blade. Made in America, used worldwide. DPx is now returning the knife to its original manufacturer, Shon Rowen and Micro Tool.

The DPx H•E•S•T Original changed the way professionals think of a survival blade. It had to be to be useful and it couldn’t fail when deployed. The H•E•S•T concept was created by adventurer and DPx Gear founder Robert Young Pelton who applied his time in three dozen conflicts and adventures through more than 120 countries to come up with the perfect balance of concealability, utility and fail-safe operation in an innovative blade.
The H•E•S•T features a 0.19” (5mm) blade crafted from high carbon 1095 spring steel with the famous Rowen heat treatment that results in a 57-58 Rockwell hardness. You will find every aspect of the H•E•S•T Original thought out: the balance, lashing points, thumb control, wire breaker and even the ability to remove the hollow, Micarta® handles for use as a neck knife or field expedient tool.
The H•E•S•T comes with a KYDEX® sheath, paracord and cord lock, belt clip kit*, and handle removal washer.
Features
Patents: www.dpxgear.com/patents
*All runs of this knife manufactured prior to 2014 came with optional MOLLE clips (shown below), all runs made in 2014 on come with the belt clip kit.


I received the DPx H.E.S.T. about two weeks ago and was surprised at how good of shape it was in considering the pass around.  I have intentionally not read all the other reviews as I did not want to shade my judgement of the knife.  Here's a couple of pictures of the knife as I received it. 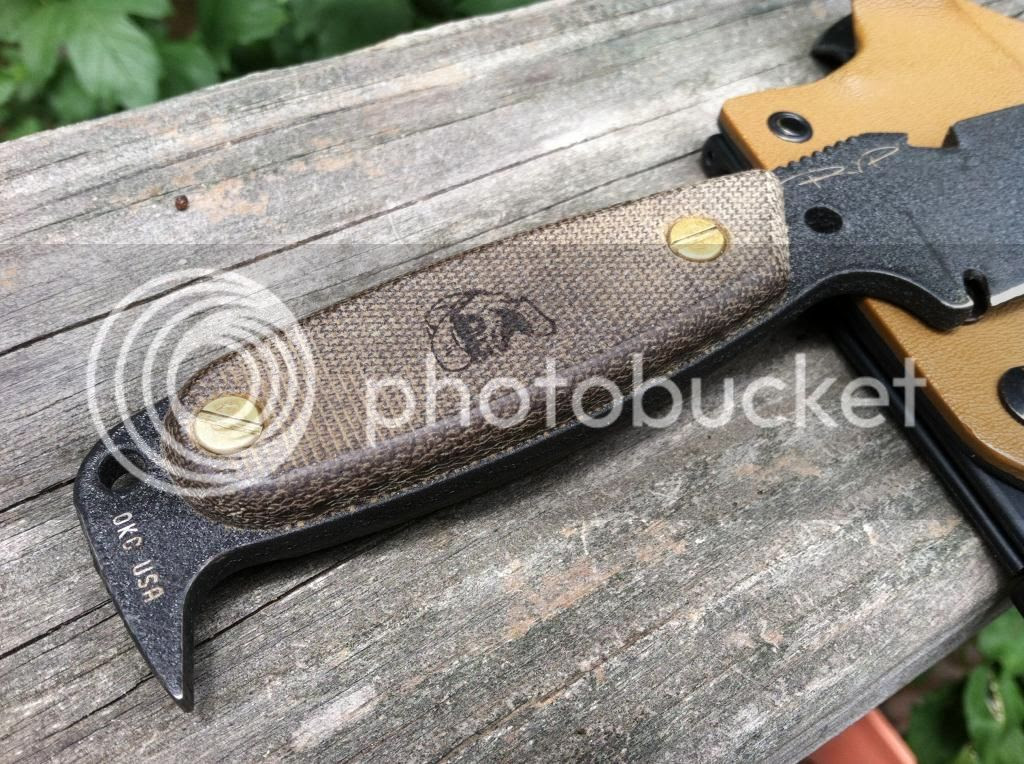 As seen in the first picture, the Micarta scales are showing signs of use from handling.  The knife still handles well and I have not had any issues with it slipping in my hands during use.

The following picture shows a bit of rust at the DPx logo on the blade.  The parkerizing does not appear to have any thin spots and I was not able to find any rust spots on the blade or under the scales where there was parkerizing.  The coating is even across the entire knife.  It does have a satin texture to it which I do not care for, more on that later. 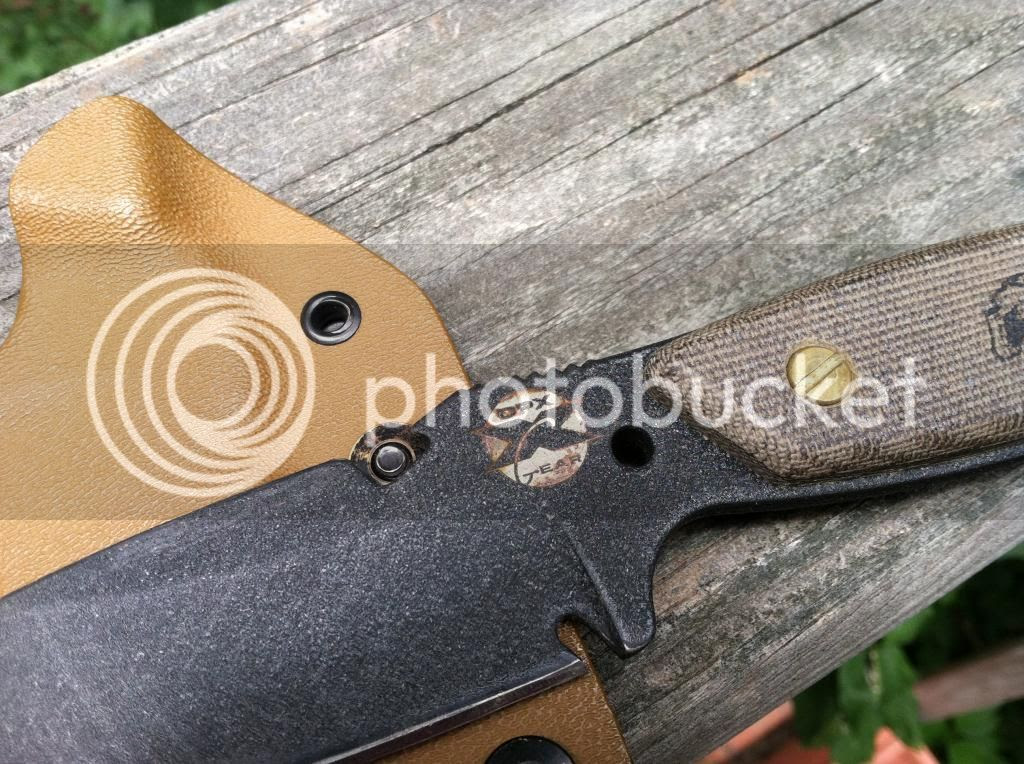 The sheath is kydex with Blade Tech brand MOLLE webbing locks attached.  It is sturdy, with painted brass Chicago Screws attaching the MOLLE locks to the sheath.  They will not work for a horizontal attachment without modification.  I suspect different attachment points setup for a belt can be added without too much trouble.  Retention is very secure according to my shake test but I'd think twice before trusting it to any form of inverted carry.  There is a drain hole in the bottom of the sheath that allows water to drain.  As shown in the pictures it is Coyote Brown on one side and black on the other.  I flipped the attachments over to convert it to left-handed carry.  The MOLLE locks did fit over one of my leather 'gun' belts (essentially a thick pants belt) providing a very secure attachment to the waist.

The knife has several innovative features.  My personal favorite is the storage compartment in the handle. One accesses the storage by removing two brass Chicago Screws and then removing one of the Micarta scales.  I removed and reinstalled the screws using a tapered flat point screwdriver, a dime, penny, the rim of a .38 Special case, the rim of a 5.56 case and a flat point gunsmithing screwdriver.  I did have issues removing the scales unless I removed both parts of the Chicago Screws.  Both scales have a hollowed out section creating a very small compartment for storage.  If you're planning on using this for a survival kit don't plan on carrying much.  I was able to fit ten .22 LR cartridges in with a bit of careful placement, or twelve foot of masons, line, or a folded $20 bill and there is room for two if folded carefully and so forth.  As the knife has lashing points I felt like the mason's line along with a couple of fish hooks made the most sense. 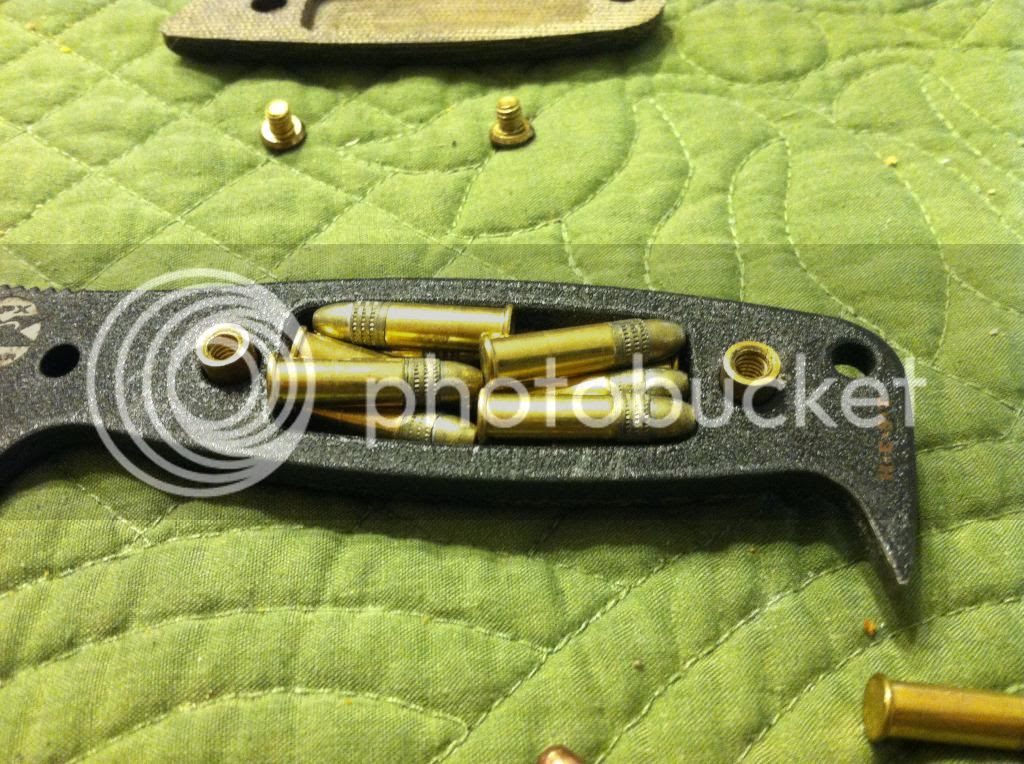 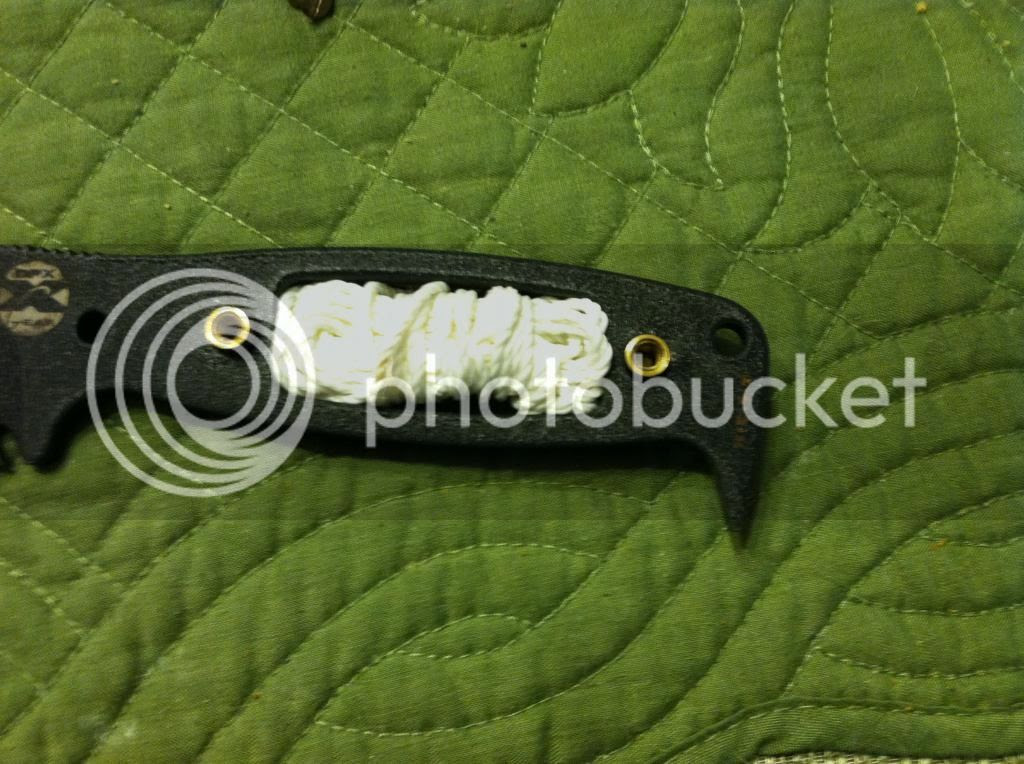 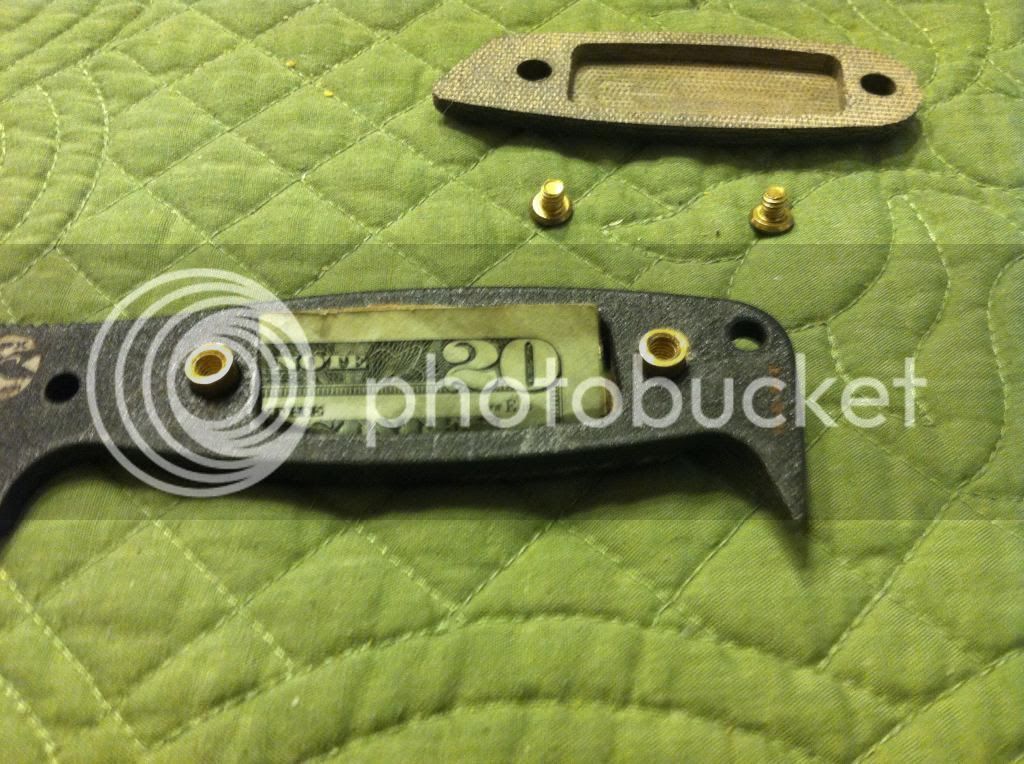 When I mentioned doing a review on a different forum a point was brought up that the brass screws were a design flaw and they should be replaced with steel as the slots will start to strip out with repeated use.  I totally disagree with that suggestion.  Steel will rust and even stainless steel will oxidize and gall the threads together.  Brass is much more resistant to that particular issue.  As far as repeated use, I don’t feel as if tiny storage compartment was designed for easy and repeated access. 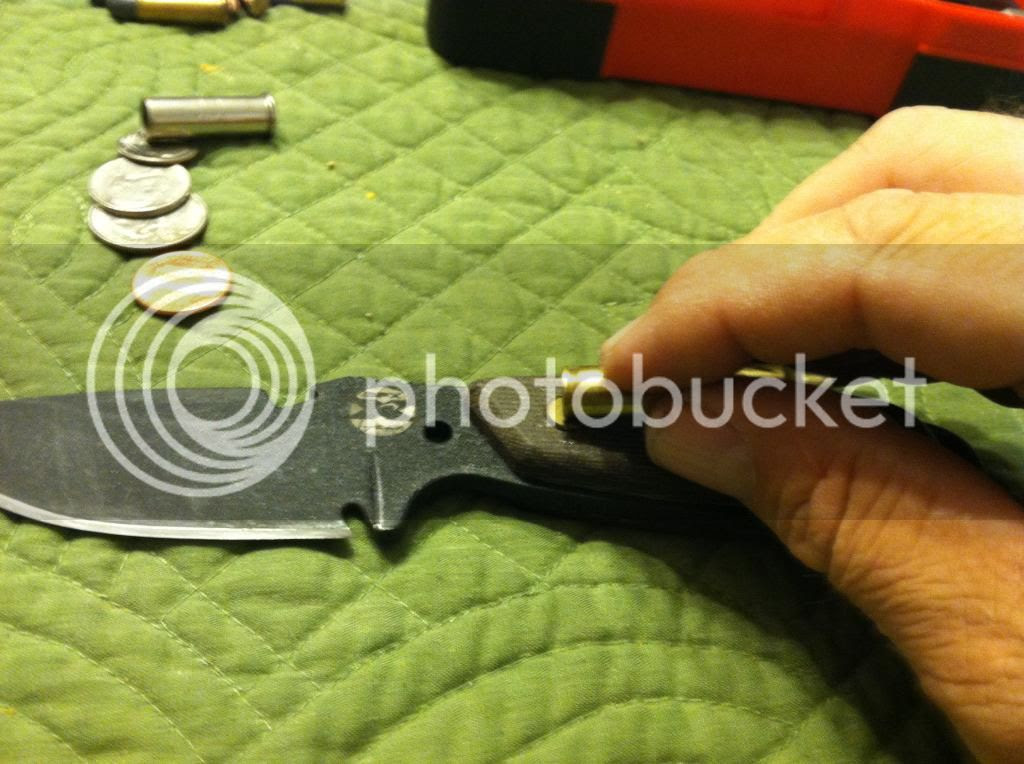 The other major tools are a bottle opener, pry bar and wire breaker.  The bottle opener works after a fashion.  My son and I both opened a bottled soda at the same time, me with the H.E.S.T 4 and he with a Swiss Army Knife bottle opener.  His was off with a flick of the wrist but I had to make three attempts to get my cap off.  The spine of the H.E.S.T. 4 is so thick that it just won’t fit under a bottle cap properly.  It did however, work.

The pry bar strikes me as a trip to the E.R. waiting to happen.  The knife’s design places it on the back of the rear bolster.  To properly pry one has to use the handle which does not provide a lot of leverage.  The tendency is to increase the length of the lever by grasping the edge of the blade.  Even with the sheath over the blade excessive force could cause the sheath to slip up the blade and create a nasty cut.  Once again something to be aware of, especially if one is in an environment as this knife was purportedly designed for.

I’m not really sure what the purpose of the wire breaker.  I understand the theory, I just can’t figure it’s place on a knife.  I could not get it to break a piece of copper electrical wire.  I have speculated that one might be able to use the blade to pry open a gap in a strand of barbed wire and work the knife back and forth and eventually break a strand.  As I didn’t have access to a fence of that type I was unable to test the theory.


The very first tests I performed was the put the knife in the hands of my `14 year old son and have him open some bags of top soil.  During this process I had my first issue with the knife, cleaning the blade. 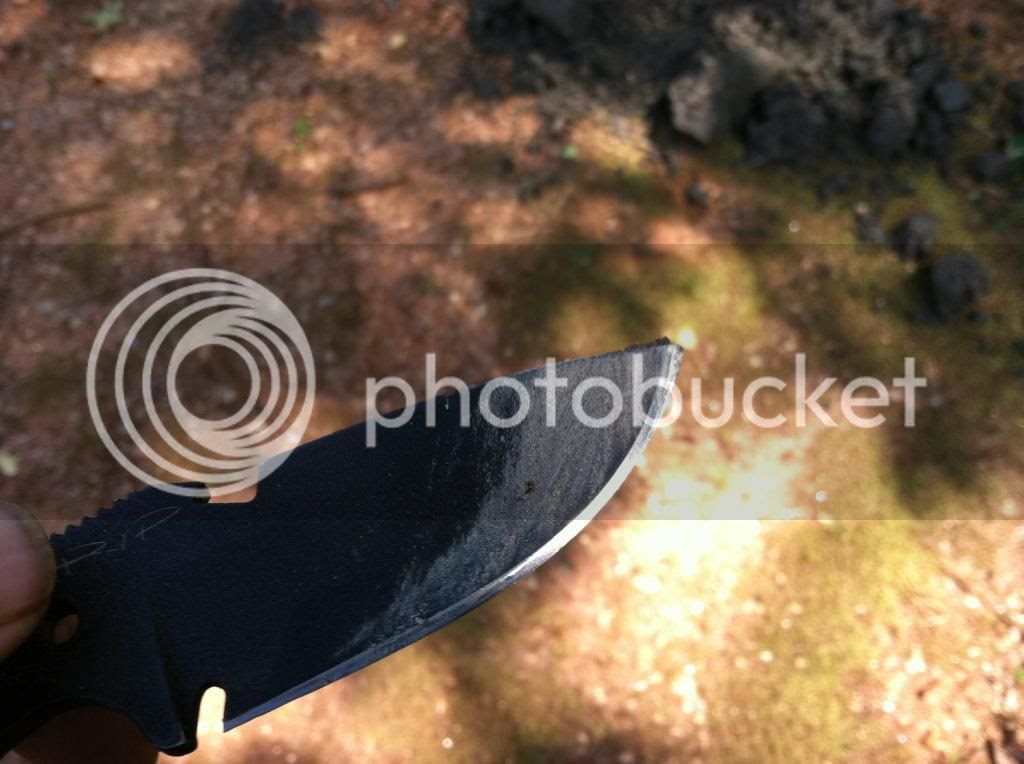 After the second trip to the sink, liberal use of dish soap and a dish rag. 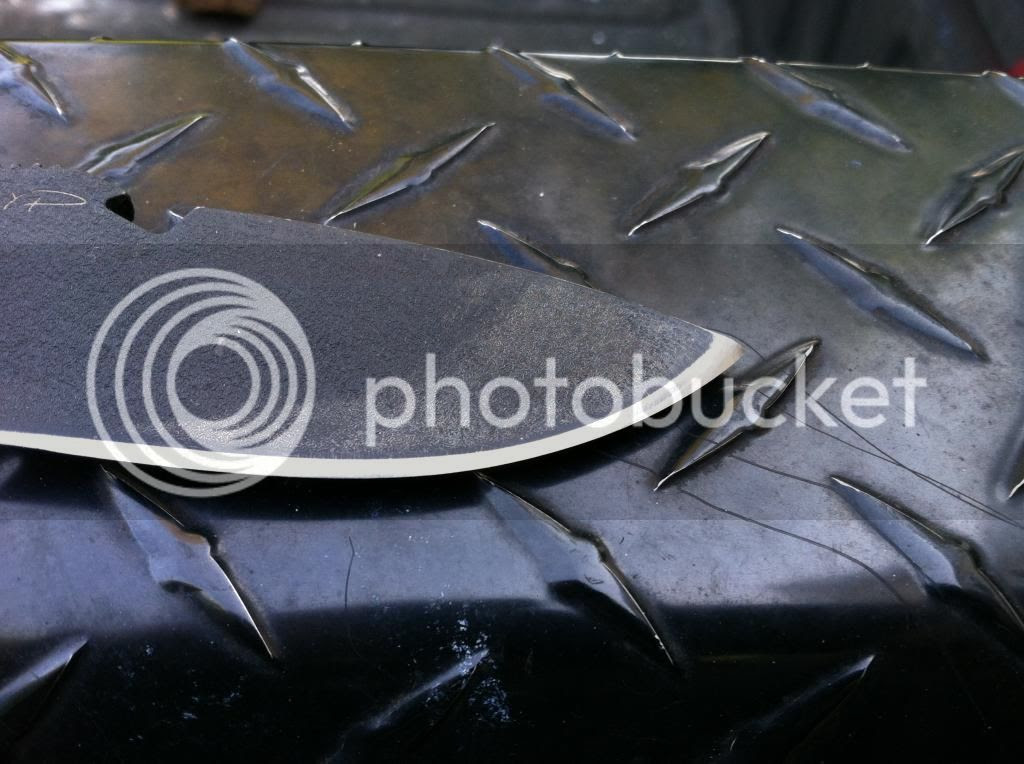 I have concerns for using this knife to process game.  If I can't fully clean a little bit of dirt from the blade with two trips to the kitchen sink, dish soap and use of a dish rag how am I going to clean blood from the blade?  Especially in the field or in the extreme conditions the knife is supposed to be designed for.  In my opinion the Parkerizing creates a potential health issue that one needs to be aware of and hopefully prepared for.

At the risk of insulting some of the previous testers, the edge of the blade was in rough shape.  It had no less than three different bevels down the length on both sides.  I put the knife on my Lansky and cleaned the edge up to my satisfaction.  I don’t have it razor sharp but it does have a decent working edge on it.  It totally failed feathering a piece of cedar until I spent a couple of hours reworking the edge.  I can’t comment on how a new, unused knife would perform at this.

I’ve kept the knife in a vehicle quite a bit.  I ran tap water over the blade and placed it in the sheath and left it in my van for a couple of days to see how the heat and humidity would affect the Parkerizing.  I could find no spots of rust other than the aforementioned spots on the logo.  The Parkerizing is even across the entire knife.

Any survival type knife should be able to open a can.  The H.E.S.T. 4 performed this task extremely well.  There was some scuff marks on the Parkerizing but the finish was otherwise undamaged. 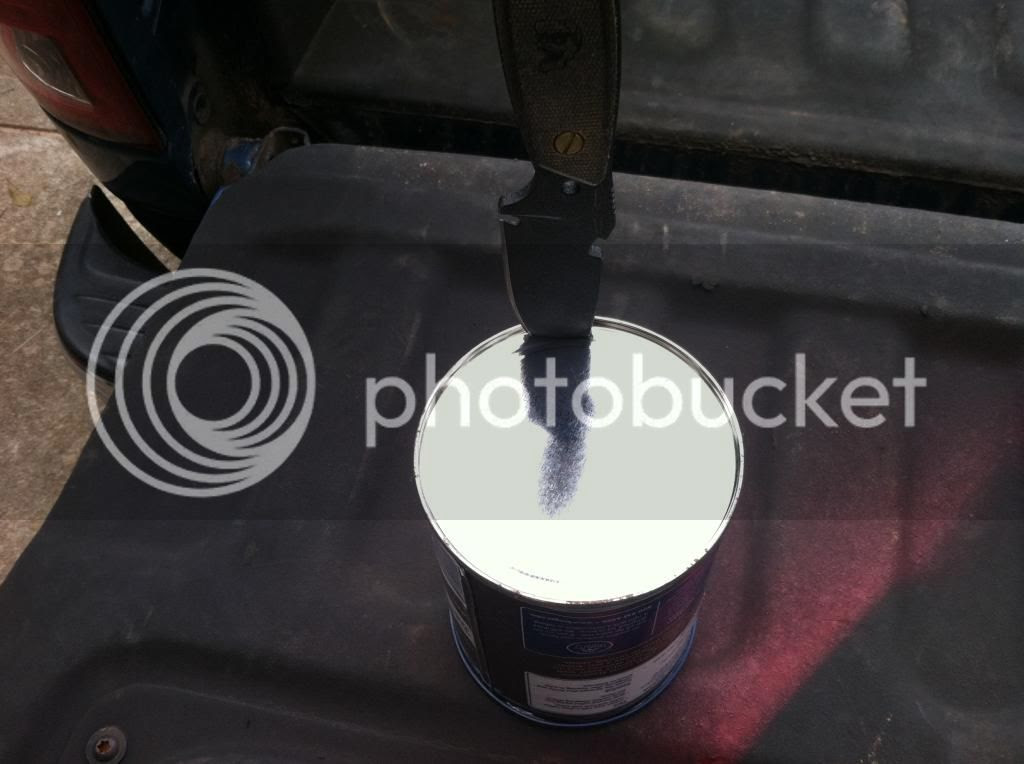 I really like the placement of the bottle opener and the curved section behind the ricasso.  They are perfectly located to allow one to grip the knife and perform fine work with the tip and belly of the blade.  As the clip point is especially well suited for skinning medium to large game I find this feature to be especially well thought out.

Being a creative sort of feller, I did find a perfectly good, alternative use for the bottle opener, wire breaker and even the pry bar. 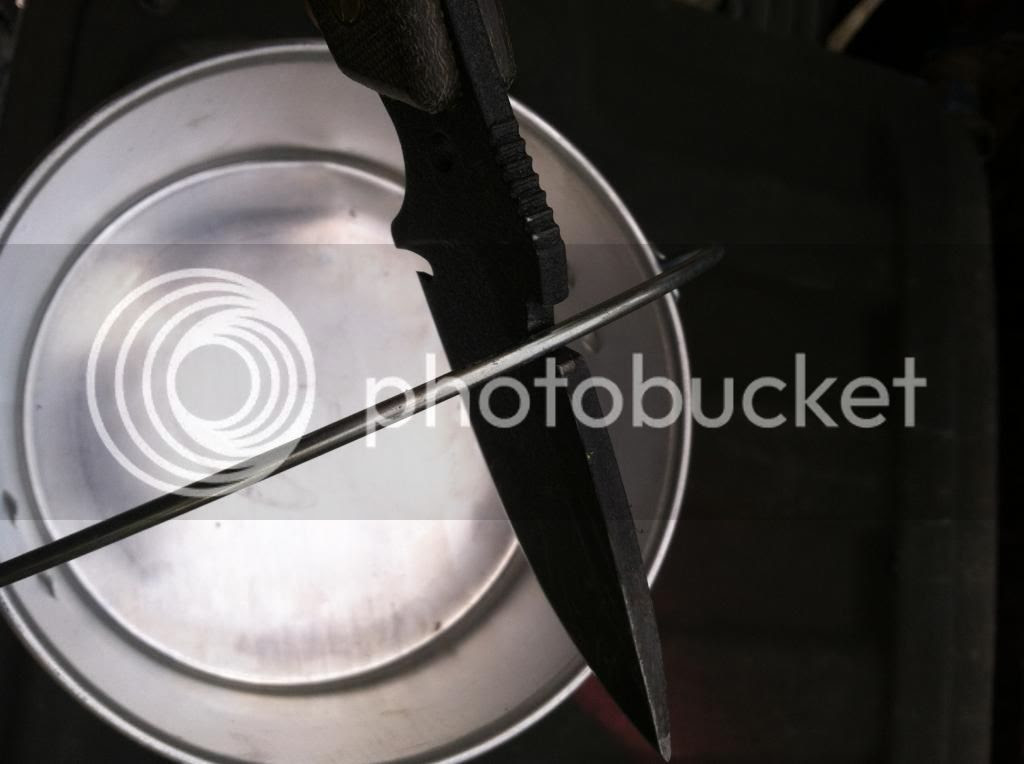 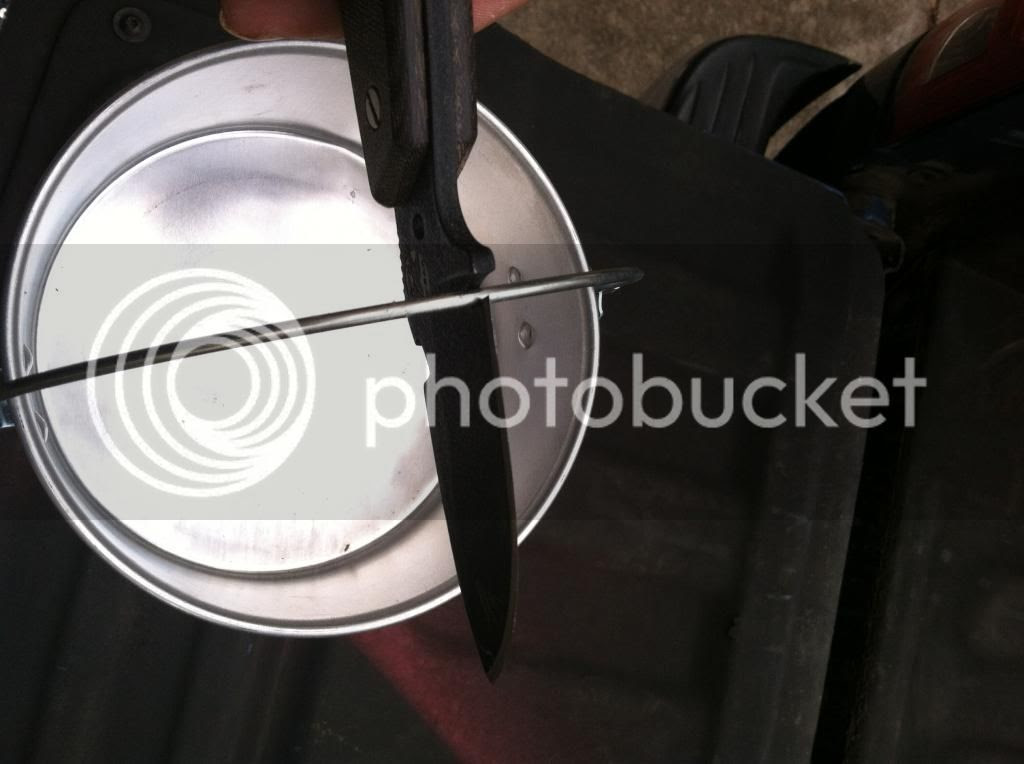 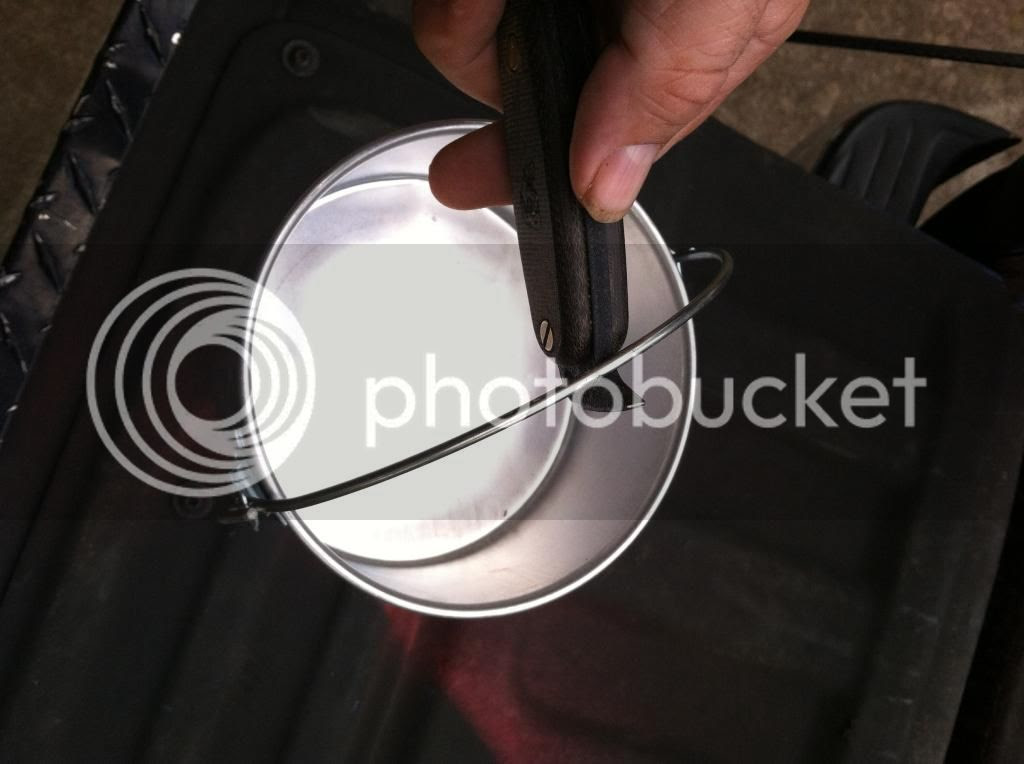 The ability to lift a pot off a fire without burning my hands is a bonus in my book.
In conclusion, I rate this knife at a four out of five .22 Long Rifle cartridges.  I’m not all that impressed with some of the features or perhaps a better term would be gimmicks however, I am impressed with the overall quality of the knife and would not hesitate to trust my life with one in the field as long as I were prepared for what I feel are limitations.