A while back I ran across a feller selling a 3" Model 36 Smith and Wesson Revolver for a very reasonable price.  During our communications across the interwebz he sent me some very poor quality pictures and declared that the pistol had some "...honest holster wear."  As I acquire guns to shoot, asthetics were not nearly as important to me as mechanical reliability.  So we agreed to meet.

As a future note to myself, I'll regard anything declared as "honest holster wear" with suspicion.  The gun looked like it had been stored in the bottom of a salt water tackle box.  There was severe pitting on the barrel, frame, trigger guard and cylinder.  I almost walked on the deal until I went through the motions of function testing the pistol.  Surprisingly, it appeared to be in almost perfect condition mechanically.  The price was low enough that after consideration I felt like I couldn't go wrong with the purchase.  The three inchers are a bit difficult to find and it was in my preferred Round Butt configuration.


Pitting on the cylinder: 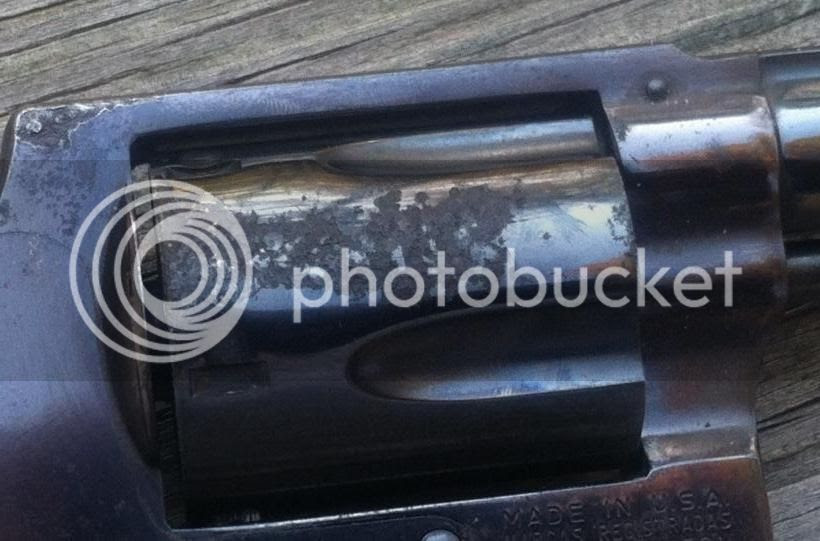 Pitting on the barrel:

I put the Model 36 away for a couple of days and was having a pretty good case of Buyer's Remorse every time I though of it.  I finally took the time to run a few rounds through it to at least see if it would hit a target.  Accuracy was good with my pet load of a 158 grain LSWC over 4.6 grains of W231.  That particular load has produced good accuracy in most every S&W revolver I have shot it through.  Feeling somewhat mollified I decided to open the gun up and see what the innards looked like.

Upon removing the sideplate I was pleasantly surprised to see that things looked pretty good.  There was a little bit of surface rust and most of the grease one finds was gummed up.  Taking another look at the cylinder showed only the faintest of turn rings, leading me to believe that this particular pistol had be shot very little.

Anatomy of a S&W J Frame: 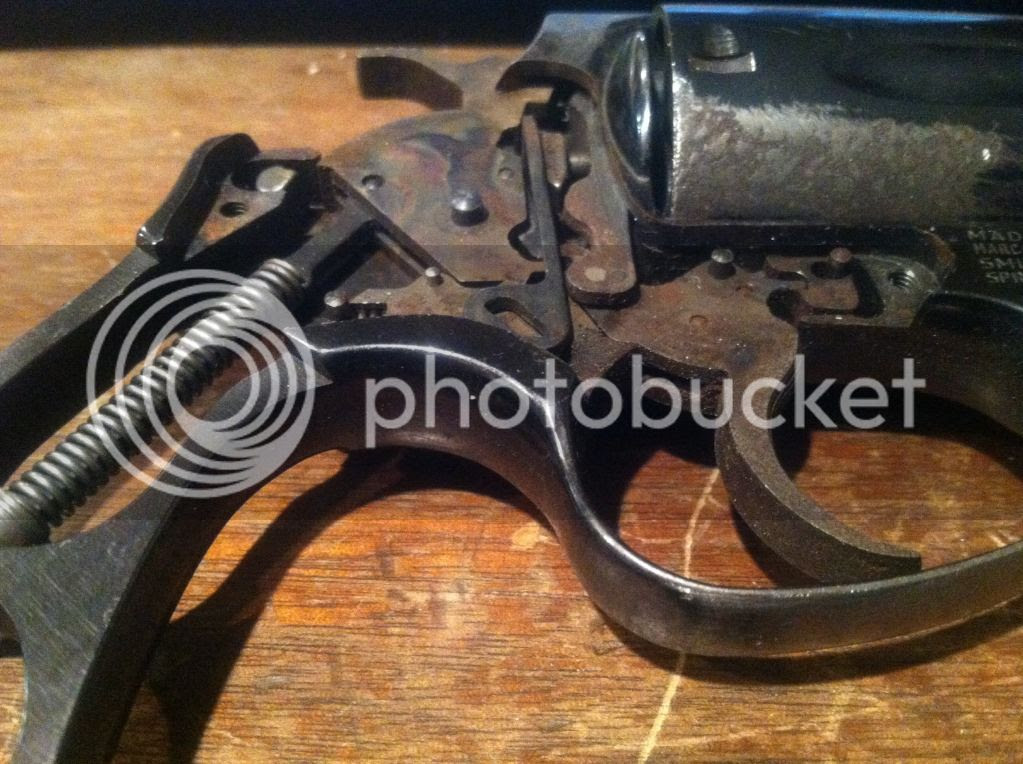 I had been looking for a Model 586 or 581 that was cosmetically challenged to commit that most heinous of acts to, customize a pre-lock S&W revolver to my specifications and tastes.  While I'm still on the hunt for the right L Frame to butcher, I decided that this revolver would be the perfect test subject, especially as I had no emotional attachment to the gun.  With that thought in mind I contacted my friend Claude Werner and got his thoughts on the matter.  For those that don't know, Claude is a well respected firearms trainer who specializes in snub-nose revolvers.  If you carry or own a J Frame or similar for the purposes of self defense or if you want training that doesn't resemble a scene from an action movie, you'd do yourself a favor by taking a look at Claude for training.

Claude was good enough to come up to my house and brave enough to enter my basement lair.  We decided that initially the Model 36 would get a bobbed hammer, rounded trigger and the cylinders chamfered.  Claude also took the time to inspect the individual cylinders to see of they needed any polishing.  We disassembled the pistol and started to work...rather Claude started to work and I drank a lot of coffee and watched him work. 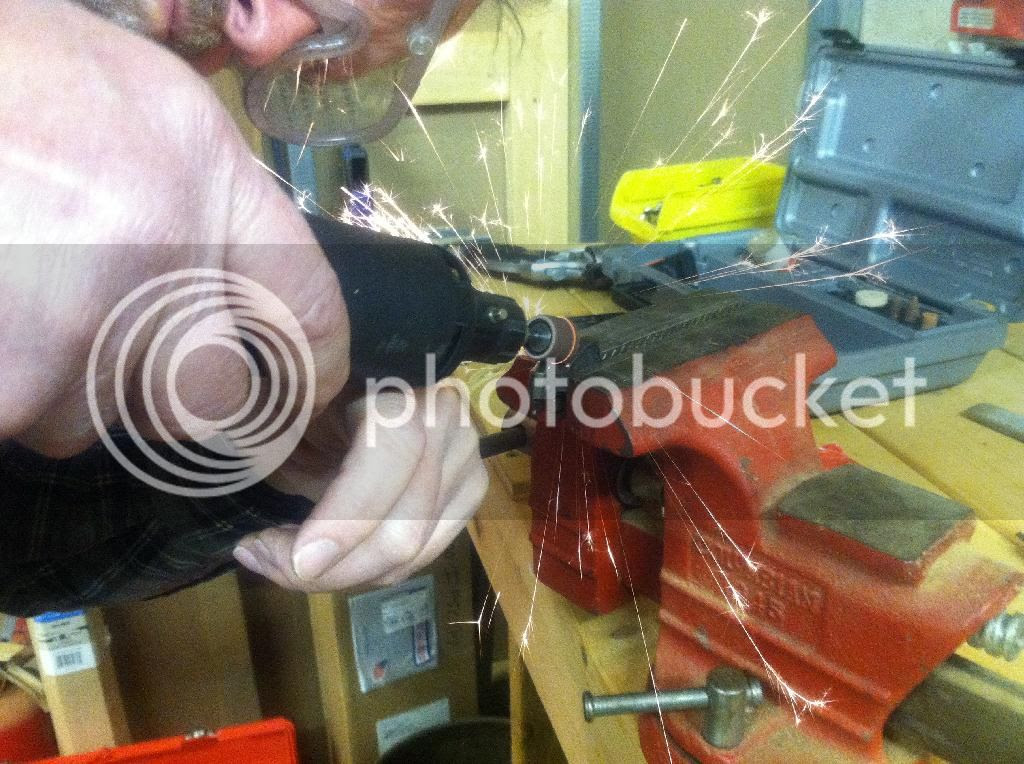 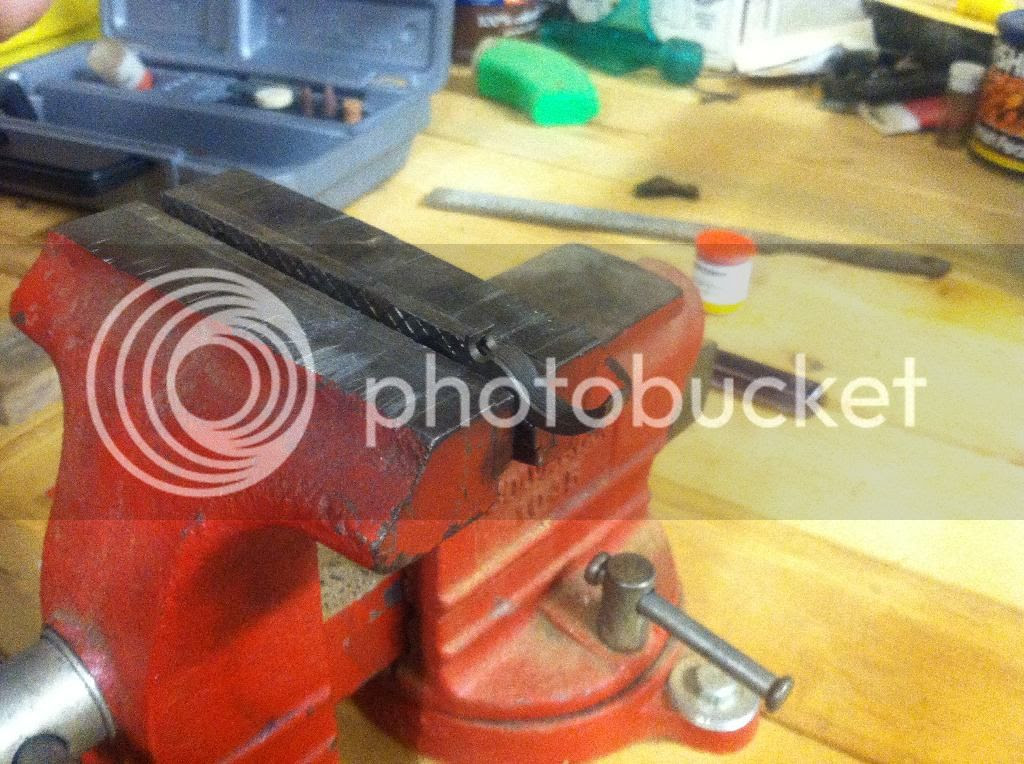 A little TLC from a moto-tool and a sanding drum: 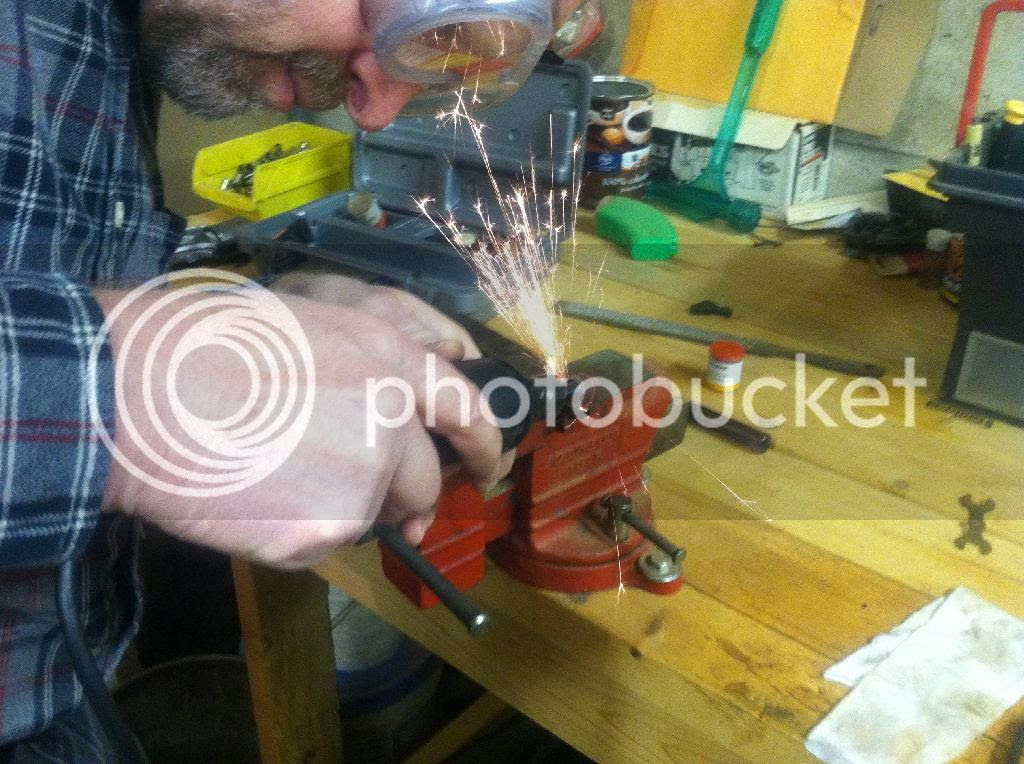 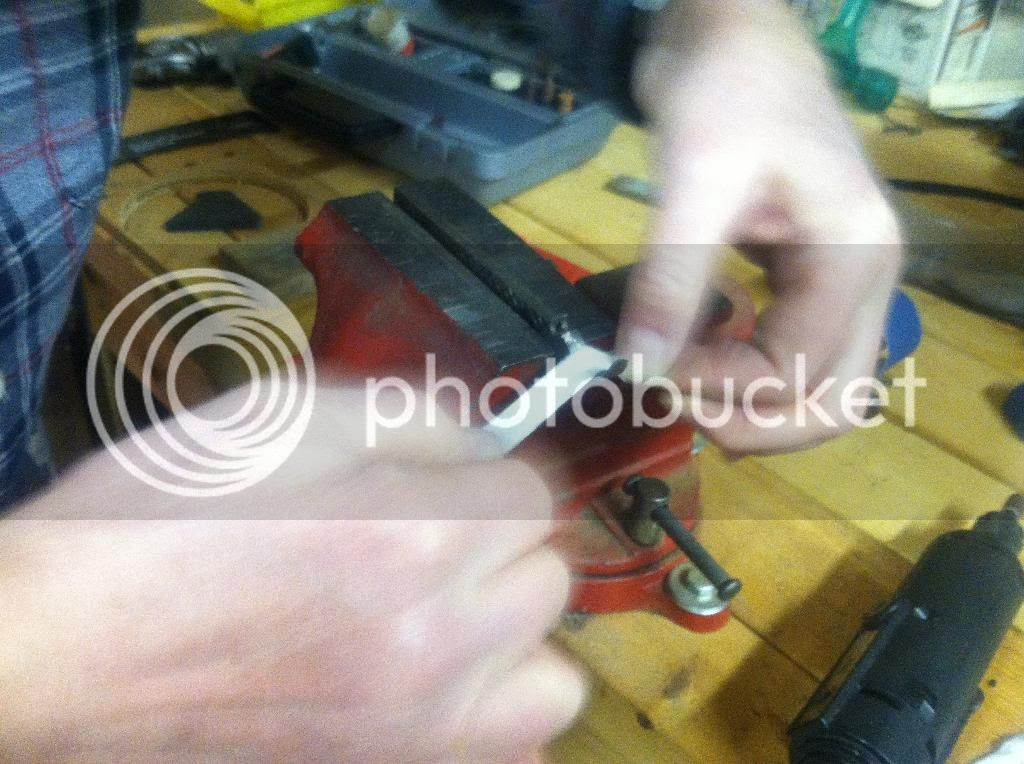 A word of caution to those with moto-tools and a can-do attitude.  I firmly believe that every person has the God Given Right to own a gun.  I just as firmly believe that moto-tools should be heavily regulated and all prospective owners required to attend a 40 hour training class before being allowed to touch anything but a scrap piece of wood with one.  Especially with guns.  The vast majority of the work was accomplished with a fine grit plumbing sandpaper, a liberal amount of elbow grease and a vast amount of patience. 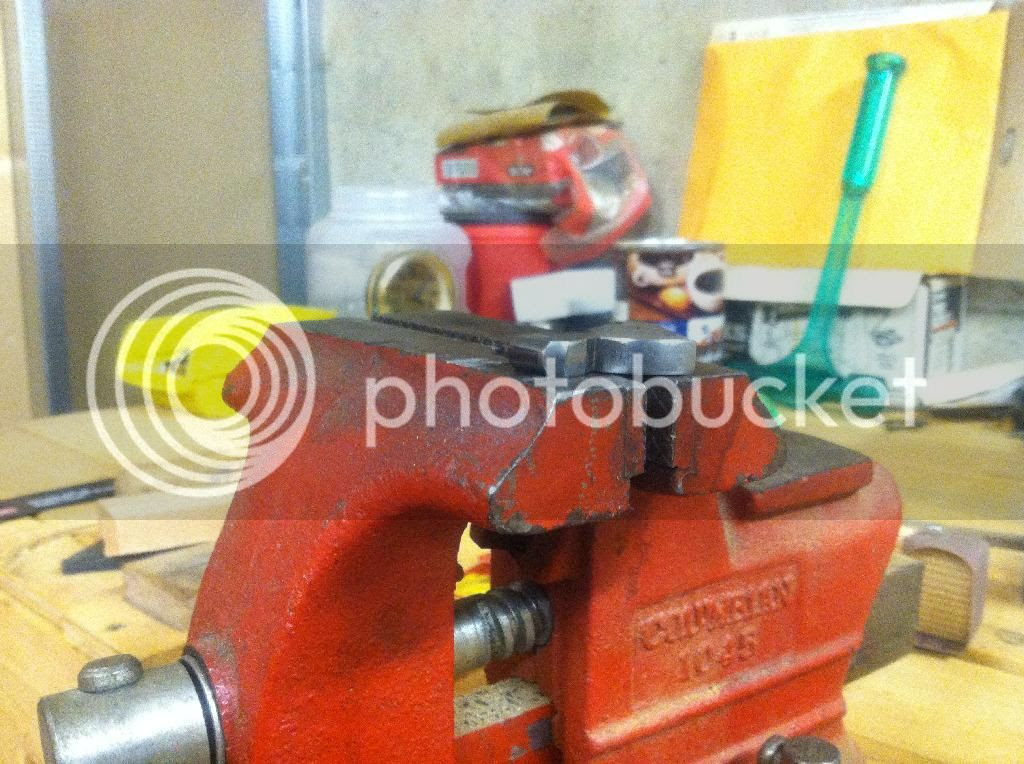 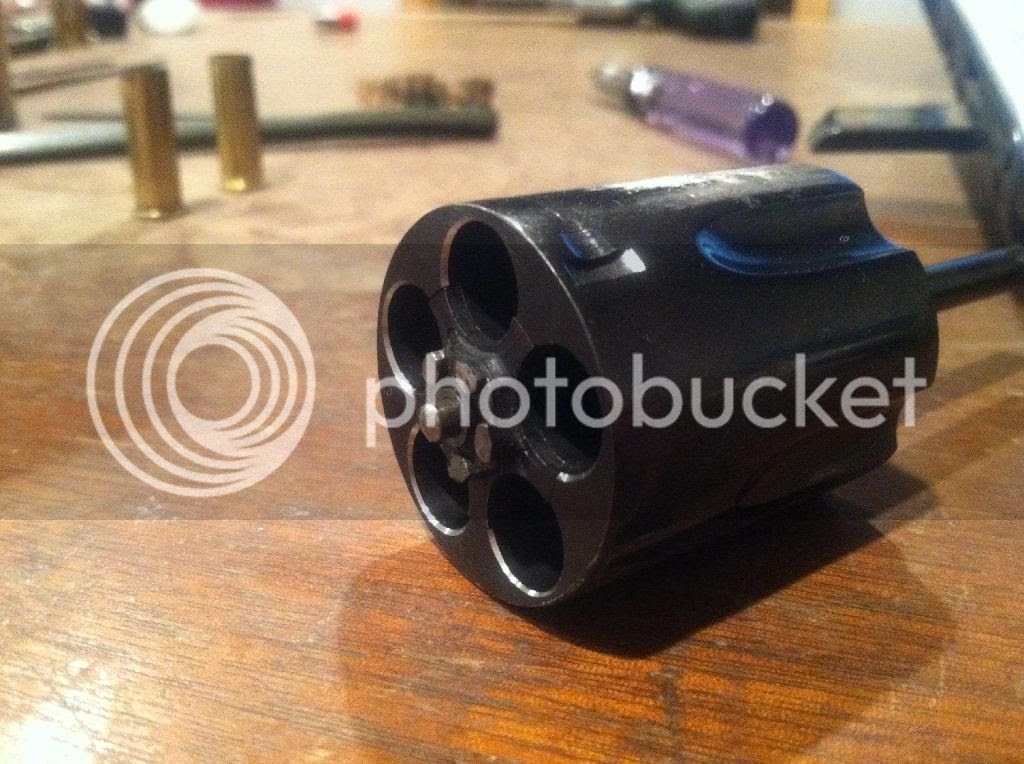 The nearly finished trigger in all it's rounded glory: 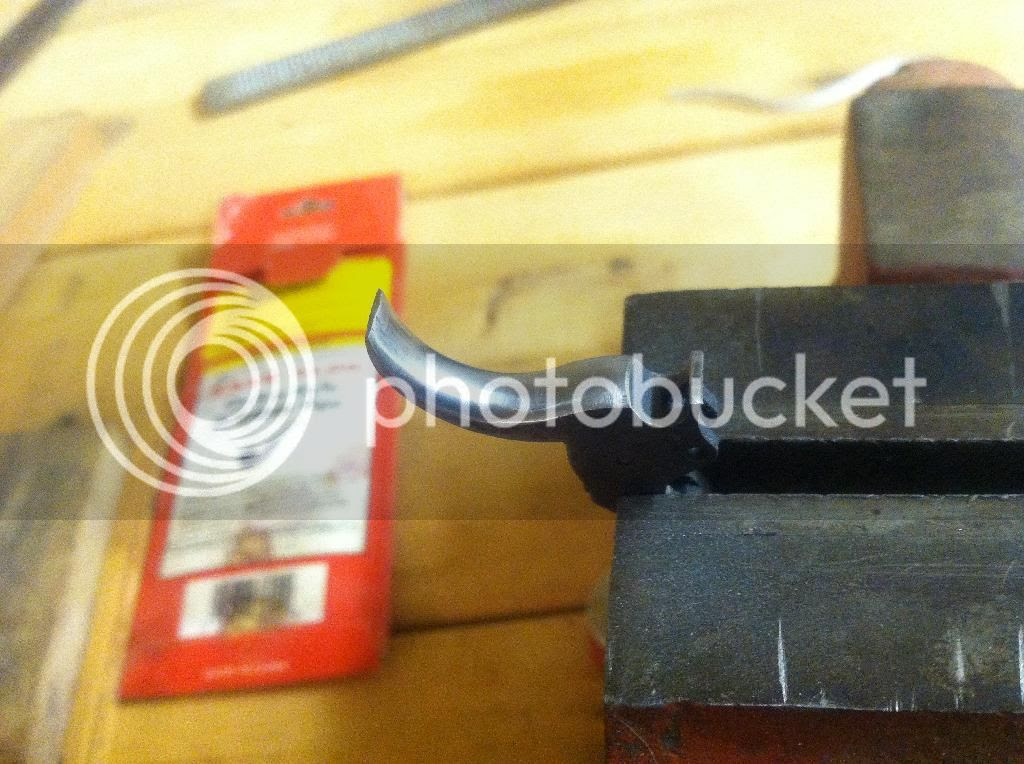 Here's a view of the Model 36 after it had been reassembled.  I was quite proud of the fact that there were no spare parts and it functioned and fired as it was intended. 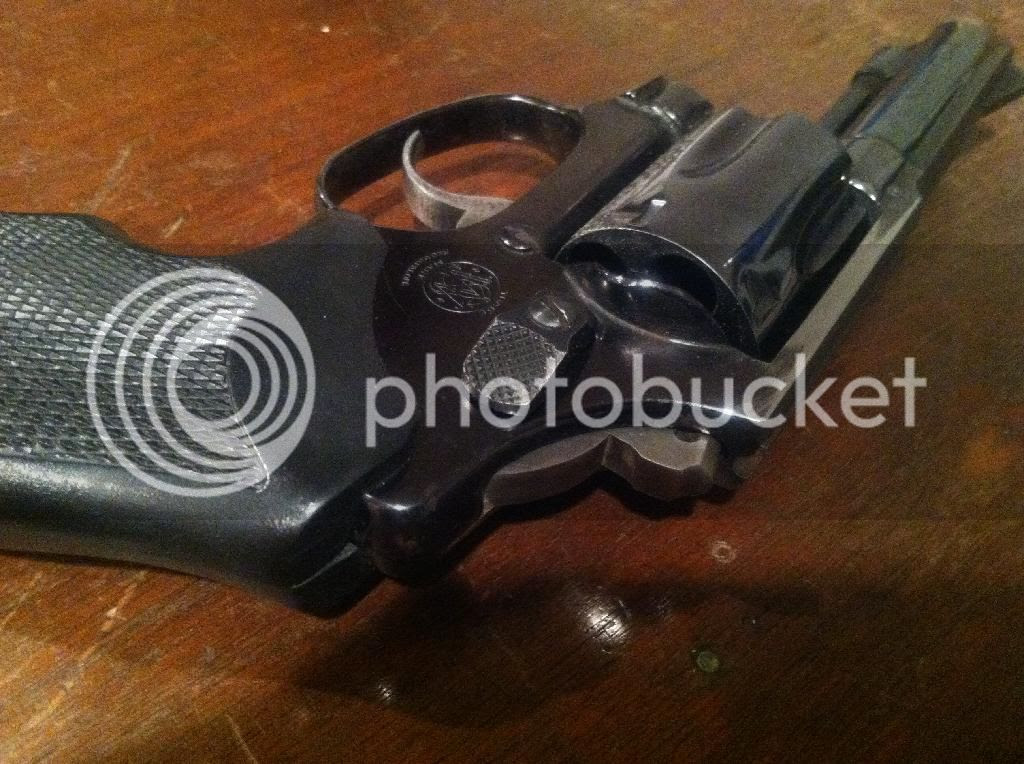 I finally had the opportunity to shoot the mostly completed project in a local IDPA "Carry Gun Only" match. It performed quite well.  Accuracy was acceptable given that I had to use something other than my preferred load for the purposes of the match, the range does not allow lead so I had to scrounge around and dig up enough jacketed ammo to shoot.  Eventually as time and motivation permit I intend to cut the Baughman Ramp front sight to something approaching a patridge style with a slight, 11-15 degree slope on the back side.  I also have plans to recrown the muzzle and maybe one day to bead blast and refinish the entire gun, perhaps with a Cerakote style product.  For now, I have what is essentially an ugly carry/truck/pack gun chambered in .38 Special.  As Claude told me when we were discussing the project and I brought up the subject of refinishing; "Everyone needs at least one ugly gun."