I purchased a Ruger 10/22 Takedown not long after they came out on the market.  I felt like it was time for my son to move up from the single shot bolt actions we had been working with so we took a trip to one of the local sporting goods stores, a locally owned one I might add and I let him pick one off the wall.

At the ripe old age of 11 his criteria for a rifle is quite a bit different than mine.  He chose the Takedown because it was stainless steel and synthetic, it looked cool, and it came with a really cool bag.  Come to think of it, maybe our criteria aren't that different after all...

The 10/22 TD, according to Ruger's website weighs in at 4.67 pounds, has a 13.5" Length of Pull (the distance from the buttstock to the trigger,) a barrel length of 18.5" and an overall length of 37".  It accepts the standard 10/22 magazines and comes with the standard gold bead front blade sight and windage and elevation adjustable rear sight.  The package also included a single 10 round magazine.  Ruger claims the rifle will hold zero after reassembly if procedures are followed.  The bag has MOLLE type webbing for a couple of small attachements, two zippered pockets on the outside and three velcro compartments on the inside.  It makes a great storage option for a vehicle or home.

One of the very first things I did was to ditch the stock sights.  I replaced them with a set of TruGlo Fire Sights.  The TruGlo sights required a fair amount of hand fitting to get them on the rifle.  I had to shim the rear sight and do quite a bit of extensive filing on the front sight.  A word of caution, if you take it upon yourself to fit a set of sights to any gun, do the filing on the sights and not the gun.  Once you change the profile of the dovetails you'll have to hand fit any other changes you make at a later date, including trying to reinstall the original sights.

A quick side note on the TruGlo sights, the front inserts can be changed for different colors.  We chose orange as it seemed to be more visible to both my son and myself.  We've not lost or had an insert broken yet.

As of this writing we have ran approximately 5000 rounds through the 10/22 TD.  Due to the current difficulties in obtaining .22 LR ammo that has been 5000 rounds of whatever I could get my hands on.  The list includes but is not limited to;
Winchester Bulk Pack
Federal Auto Match
Federal Champion
Remington Golden Bullet
Remington New & Improved Golden Bullet
Remington Target Standard Velocity
Aquila SuperExtra plated
Aquila SuperExtra lead
Sellior & Bellot HV HP
CCI Stingers
CCI Standard
Winchester Super X
and about 500 rounds of loose ammo my brother gave my son.

If you're looking for a list of groups and measured velocities you won't find them here.  First I don't have a chronograph.  Secondly while we both have shot squirrels with the 10/22 TD that's not the kind of shooting it sees most of the time.  We share the rifle for shooting steel matches.  Mostly a local version of the former Ruger Rimfire Challenge which is now the NSSF Rimfire Challenge.  The bottom line is, the dang thing runs with just about any ammo we've fed it.  The two brands that most notably come to mind as being problematic are the Remington Golden Bullet and the Winchester Bulk.  Both had feeding and ignition issues.

Accuracy out of every brand of ammo was Minute of Squirrel at 25 yards.  Sorry folks, I haven't benched the rifle to zero it and measured groups.  I can hit a plastic water bottle at 50 yards, so that's about as technical as it's gonna get.

At this juncture you're probably scratching your head and wondering how any of this information pertains to a survival gun.  I think of competition shooting as auto racing.  Equipment sees hard use and little maintenance during matches.  Being able to drive a stock rifle in a drag racing style event with no failures and hitting the targets, some of which are quite small will show any weaknesses quickly.  Sights, action, magazines, ammo, etc. if there's a weak link it will snap at the least opportune time.  So If I can load up a BX-25 magazine, shoot a course of fire four times using up twenty of the twenty five rounds in the magazine, run each course of fire in less that 2.5 seconds engaging five targets that require transitioning and have no equipment failures then in my mind I've got a pretty decent setup.  Reliability is the key.  So let's apply what we have to a survival setting. 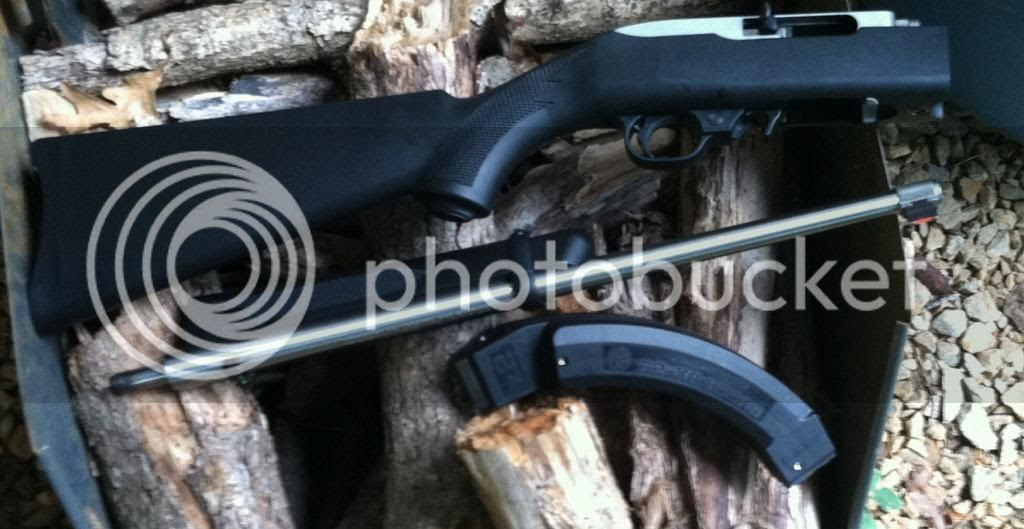 The gun is compact and light weight.  It's fairly accurate.  It will feed almost any ammo reliably.  It will work in suboptimal conditions. The Length of Pull and weight allow it to be used by smaller framed people as well as big, hulking brutes.  It's based on one of the most popular brands of .22 rifles made.  That means magazines are relatively inexpensive and accessories are readily available.  Ammo is lightweight and easy to pack.  There are dozens of options for ammunition with various velocities, bullet weights, bullet designs and intended applications.

So what are the downsides?  It's a .22.  While I'm not a caliber snob by any stretch it does have limitations.  It's not the best choice for anything larger than small game.  It's not the best choice for self defense either but, I'll be the first to recommend a .22 for a smaller framed person, someone with grip issues making cycling a slide or manipulating a double action trigger difficult if not impossible or folks that are sensitive to recoil and/or noise.  A .22 rifle with a magazine holding twenty five rounds can lay down a tremendous volume of accurate fire.  We teach that shot placement trumps caliber, penetration, expansion, and the myriad other 'criteria' for a defensive firearm.  Simply put, if you can't hit what you're shooting at, none of that other stuff matters.

It's not my first choice for a survival gun.  It's not even my second or third.  However if it's all I had close to hand, I wouldn't hesitate to pick it up, assemble it and drive on with my mission of getting out of whatever situation I've found myself in that might require a firearm.  If you're looking for a well built, accurate, robust firearm for plinking, survival, general vermin eradication or even self defense that comes in less that $400 you might want to take a bit of time and research the Ruger 10/22 Takedown.