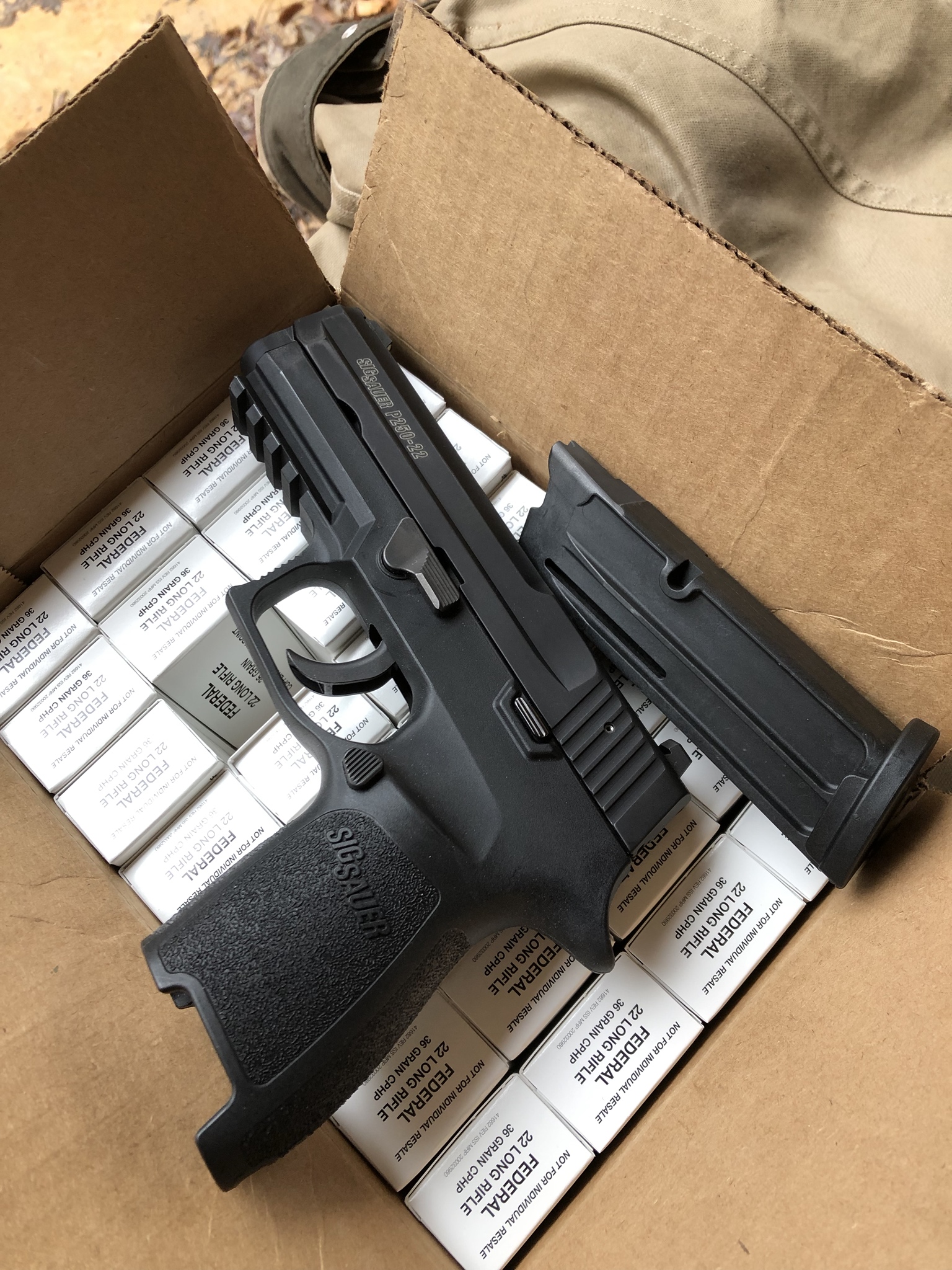 I've arrived at the stage in my life when most of the folks that claim to be "in the know" start telling me or anyone else that will listen that something is "bad" or at least "not good", I start having urges to look for myself and see what all the fuss is about.  Since I operate on a limited budget like most everyone else that sometimes means that when I finally get around to trying something out the folks that were flapping their gums have moved on to something else.  In this case I have long been wanting to try out a Sig P250 in most any caliber.  When I was able to acquire one at a cost that was reasonable to me I jumped at the chance.

What I ended up with was a P250c kit that had a .40 caliber upper with one magazine, one medium compact grip module, one .22 caliber upper with two magazines, and of course the fire control unit.  My acquisition was brand new in the box.  At this point I should have taken pictures of the individual component groups with a brief description.  As it turns out I was so excited to finally get my grubby mitts on one that I instead tossed the 22 upper on top and off to the range I went.

I had a partial box of Remington Thunderbolt, in my opinion one of the lower quality bulk ammos available.  Of the 134 rounds fired I had two Failures To Fire and one Failure To Feed.  The FTFires I attribute to the ammo and the FTFeed I'm going to initially blame on the magazines.  The 22 magazines are rather difficult to load compared to a M&P 22 or the Kadet magazines provided for the CZ P07.  Accuracy on the other hand, was more than acceptable.

I started off with some very basic accuracy drills from three yards.  Freestyle, Weak Hand Only, Strong Hand Only, One Shot Draws, and Two Shot Draws.

In my research several people have complained about the long reset of the trigger.  I agree that it is long, much longer than my S&W revolvers.  Long enough in fact that it affected accuracy on follow up shots until I got used to it.  Therein lies one of my complaints with most folks who opine about pistols.  They are so wrapped around the axle about having a relatively light trigger with a short reset that they do themselves a disservice by not learning to properly manipulate a Double Action trigger.

As shown in the picture to the right, several of my follow up shots tended to drop low.  This was due in part to the long reset of the trigger.  As I was able to practice more I learned to manage the long reset.  This is not a gun for folks seeking fast splits on the competition field.  While not a heavy pull, it's much lighter than the typical S&W K frame trigger, the amount of travel involved doesn't lend well to fast trigger manipulation.  The few runs that I timed during this range trip showed splits of over .5 seconds.

At the end of the day I was able to run a card drill that I learned about from Lee of First Person Safety  Five shots from five yards inside a playing card in under five seconds.  It took me a few runs to get the accuracy and time down to an acceptable standard.  This was a fun drill when shot from concealment and on a timer.  The opportunity to place ourselves

under a little bit of stress when shooting, especially under the controlled conditions of a range can not be over stated.

I'm looking forward to shooting this pistol more in the upcoming weeks.  As I'm not interested in investing in .40 caliber I'll remain on the lookout for a 9mm upper or even a complete pistol that I can spend some time evaluating in a class or match.