A I mentioned in my last post, I broke down and cleaned the TCR22 at the 599 round mark because the groups in my informal accuracy tests were spreading and drifting.  There was a fair bit of...goo on the crown.  At a guess I'd say it was excess wax that was used to lubricate the various bullets.  On a slight tangent...

22 ammo, especially with lead bullets requires lubrication.  The manufacturers address this by coating the bullets with wax.  This helps with lubrication, cuts down on lead build up in the bore, and helps with the gas seal.  The downside of this was discovered during the recent ammo crunch when manufacturers were cranking out 22 ammo to the tune of millions of rounds per day.  Due to the huge demand for 22 ammo and the resultant rush to match demand QC did suffer somewhat.  I can personally attest to pulling new ammo from a box, loading it in the magazine and having to wipe to wax buildup from the feed lips before inserting the magazine in the firearm.

22's are inherently dirtier than most centerfire firearms.  This is directly related to the direct blow back action that virtually every semi auto 22 uses.  That results in quite a bit of unburnt powder and other residues finding their way into the action, bolt face, firing pin channel, magazines, magazine well, and so forth.  I am both surprised and pleased that the TCR22 has run quite reliably up to this point.  One of the idiosyncrasies of 22's is they require a bit more maintenance than most centerfires to remain reliable.

I came across a bag of Swab-Its bore cleaning tips that I had in a bag of half forgotten match swag.  They screw directly to the cleaning rod and are much easier to use that patches and the traditional eyelets or jags.  They can be washed and reused.  If these hold up well I am going to invest in some for my field kits. 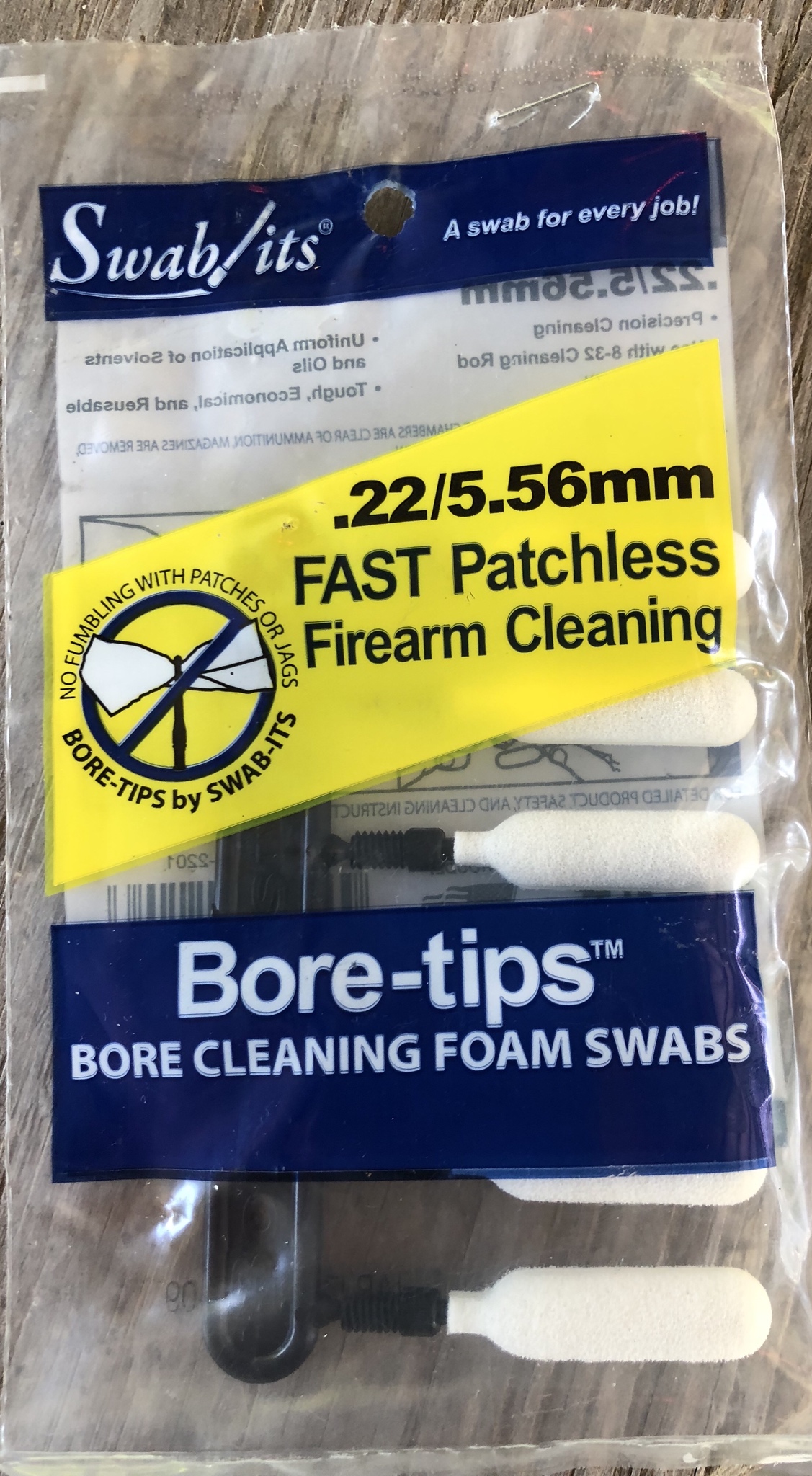 Cleaning the TCR22 was no different than cleaning any other standard 10/22 or clone.  Make sure the gun is unloaded.  Loosen the take down bolt, verify the safety button was pushed in halfway, rotate barrel and receive from stock, remove bolt and trigger group from receiver, clean.  Then reverse the steps. Easy peasey.  The only thing that is easier in my opinion is cleaning one of the take down models.

Let's face it folks.  Cleaning guns is BORING.  I can post 100 photos and it's still boring.  The process is however, necessary to an evaluation of any firearm.  Field stripping, cleaning, and reassembly are all important to keeping our guns up and running when we need them.


The final phase of my initial evaluation is what I like to think of as drag racing with guns, shooting steel plates in a manner similar to the RCSA.  Running guns hard and fast will find failure points that we may never see in casual shooting.  For instance, I started off shooting Steel Challenges with a Ruger Mark 2.  There came a point where I could outrun the gun in it's stock configuration.  With that example in mind, I'll attempt to describe what I did with the TCR22.

First of all, the scope came off.  This is relatively short range shooting that requires the ability to rapidly transition from one target to the next to the next, etc.  Using the iron sights and my standby of Federal Red Box ammo and the Reger BX15 magazines, I started off slow with a drill that requires shooting a steel silhouette, a 6" plate on a rack, back to the silhouette, next plate, until all six plates were down and finished with a 'head shot.'  I timed these drills with an average of 11 seconds from beep to last shot, starting from a position of Low Ready.

From there I ran two magazines (thirty rounds,) of starting from Low Ready and placing one shot on a silhouette, average was .52, which is pretty slow by steel challenge standards, lest anyone think I have an inflated opinion of my...abilities.

The final drills were either Bill Drills, which starts from Low Ready and place six rounds on a silhouette as rapidly as possible without sacrificing accuracy, or a five shot variation which I used to mimic The One Second Challenge, three targets, five shots, hopefully in less than one second.  The average for the Bill Drills was 1.10 and the five round version averaged at 1.1 with a couple of .93 runs.  First shot was still at .5.  Unless my math and shot timer are misleading me that means the bolt is cycling extremely fast.  I didn't pick up on that until I started looking at the numbers.  I'll have to test that further at a later date.

At this point I'm starting to feel like a broken record.  The speed tests put another 197 rounds through the gun, 17 or which were CCI Mini Mags with...you guessed it, no failures.  I did have a couple of issues.  First and foremost was the rear peep tended to slow down target acquisition.  If I were to use this as a steel gun I'd remove the rear peep and either use the rail as a gutter type rear sight or go with a red dot.

The trigger was slowing down splits as well.  Remember when I mention it was crisp but heavy?  That tends to affect shooting fast as well as shooting accurately.  I'll take a look at that when I have an opportunity to test with the Ruger BX trigger.  On another of my slight tangents, outside of gun games I don't think about splits.  It's a meaningless increment of measurement for most practical applications.  No offense to my gun gaming brethren intended.

If I were to be asked my thoughts on a 22 rifle that would be suitable for a multitude of applications and a broad range of skill levels, I'd most certainly recommend the TCR22 with the caveat that Thompson Center maintains the same level of quality that I've encountered with my example.