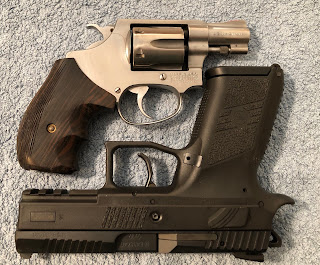 Most serious students of the defensive pistol will only grudgingly acknowledge that a revolver is a suitable defensive tool, usually with the caveat that they make great back up guns, pocket guns, and are preferable for entangled fights.  The idea that one might choose to carry one as primary lethal force option is usually met with a incredulity, closely followed with either a remark about "Old School Cool", or a less pleasant reference the "Fudds."  In other words, most folks view carriers of revolvers as some sort of gun hipster or an old curmudgeon, neither of which has realized that reality has surpassed his or her understanding.

When discussing the revolver as a viable primary lethal force option, what usually crops up are instances, real or imagined, of fighting off multiple attackers and the need for more on board ammo, relative size, relative weight, relative speed of reloads and the need or lack of need for a reload, so forth and so on.  So why in the world would anyone choose a firearm that has remained virtually unchanged in over 100 years, with a relatively inferior cartridge, as their primary means of lethal force?

Let's start off with comparisons.

One of the strongest and most often cited arguments against revolvers is the relative size to a compact semi-auto.  As we can see here there is not much difference in actual size between this J frame and compact 9mm pistol.

The disparities in size and weight are even greater when compared to the ubiquitous K frame revolver.  Shown above is a 4" Model 10, which was the standard by which all duty weapons were judged for decades.  The 10-8 pictured above is superbly accurate and a pleasure to shoot.  Unloaded the model 10 weighs around 34 ounces while the P-07 weighs 27 ounces.  Those numbers are startling to a lot of people.  Loaded with 15 rounds the P-07's weight is approximately 34 ounces, the same as the unloaded Model 10.  The model 10's weight comes in at 37 ounces loaded, so the difference isn't as large once ammo is factored into the equation.  Obviously those numbers will vary depending on bullet weights and so forth.  I used two fairly popular loads for this.  The 9mm is a 124 grain +P jacketed hollow point and the .38 Special is a 158 grain +P lead, semi-wadcutter hollow point.  Suffice it to say the weight differences in possible in ammunition aren't enough to matter for our purposes.

With the glaringly obvious differences is weight and on board ammunition capacity it would seem that there is a fairly strong argument for the P07 or a similarly sized pistol.  What about accuracy? Reliability? Ease of use?

I've found both both to be very accurate.  Accuracy is partially ammo dependent however, with good loads either pistol is capable of good accuracy at ranges out to twenty yards.  I haven't tested either further than that at this point.

Both guns are quire reliable.  Ammunition is once again a large part of reliable function.  The use of good ammo has shown me that both guns are quite dependable.

Ease of use is very subjective and covers quite a few specific fundamentals.


In conclusion both guns are relatively easy to shoot, albeit the revolver takes more effort to learn to shoot well, accurate, reliable, and weigh about the same to carry.  At this stage the only difference that isn't subjective is the amount of ammo one can carry on board.  An astute reader may have noticed that I have left out the speed and ease of reloads as well as carrying spare ammo.  That's another conversation entirely that I hope to address in future writings.

I had hoped to cover both the Pros and Cons of revolvers in this post.  As I started writing I realized that to cover this with any level of detail wasn't going to happen in a typical blog post.  The next segment will be broken down into the actual Pros and Cons.